Most all of us have seen or heard about the FAA Flight Advisory put forth regarding the GPS testing by a company called LightSquared, taking place throughout the west (330 nautical mile circle in Nevada).

LightSquared is a company that is building a large broadband network that many fear many interfere with GPS signals used for navigation.  Therefore, the company, at the request of the FCC, is conducting cooperative testing with the FCC and the GPS community to see if any interference may exist.

According to the interview between Russ Niles of AvWeb and Jeff Carlisle, LightSquared’s VP of Regulatory Affairs, the following has been developed for the testing process:
A.  Technical working group of 35 primary members*
B.  65-70 advisory members*
*Members are a virtual “who’s who” within the GPS and Federal Government communities including the Department of Defence, FAA and NASA.
C.  Testing methodologies and locations developed.﻿﻿﻿

﻿D.  GPS units developed into seven (7) categories for multiple types of devices across many platforms.
E.  As mentioned by Carlisle, lab testing started just prior to field testing.

What is going on in field testing is straightforward:
A.  Test tower is erected
B.  Base station established
C.  Turn on the power and conduct power level settings and frequency testing near tower and at established distances to discover how the signals are affecting GPS units in real world.

﻿
In closing, it was stated that bench testing is ongoing and that the final results will be published on June 15, 2011. 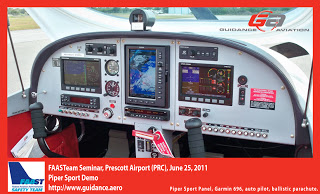